All things Rahr and related

The poem above – spelled out.

William Rahrs’s Sons – Eagle Brewery Employee photo taken in 1897. This brewery operated from 1849 until 1920. This photo cannot be copied or reproduced without the written permission of the Manitowoc Public Library.

William Rahr Sr. – circa 1900. William Sr. was the son of William, the founder of the Rahr Brewery. In 1900 he resigned as president of the brewery and devoted all his energies to operating Manitowoc Malting Company with his two sons, Max Jr. and William Jr. along with his wife, Olga.

Cereal Products Company, 1926. Ad found in the brochure for the Manitowoc County Fair. Since this was during the time of prohibition, Rahr Malting became a cereal products maker to survive.

Anheuser-Busch Grain storage towers – located at S. 7th & Washington St. This postcard photo is circa 1960s. This facility was sold by the Rahr family to Anheuser-Busch in 1962.

Rahr Horse Stable building – located on the brewery grounds at S. 7th and Washington St. This photo was taken in 1990 before the Horse heads were removed from the side of the building. Photo courtesy of Michael Novak.

Rahr Horse Stable – This photo was taken in 2008 after the horse heads had been removed from the side of the building. Photo courtesy of Michael Novak. 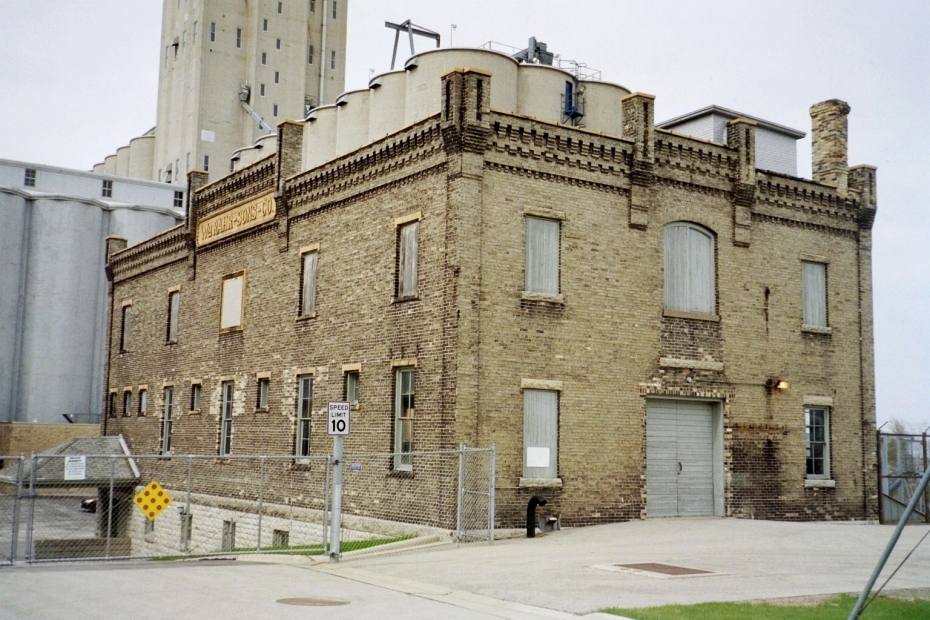 The oversized vinyl beer bottle banners on the side of three downtown Manitowoc Riverland Ag. Corp. grain silos are coming today and Thursday. One local businessman, Dr. Freud’s Jim Vogel called them an iconic symbol of the city. The banners have been a highly visible downtown landmark for nearly 20 years. Beneath the banners are a painted mural on the concrete silos depicting two cans and a bottle of Anheuser-Busch beer, the former owners of the mammoth malting plant until sold the summer of 2011 to Riverland. A representative of the company removing the banners indicated the murals also would be removed within a week. Photo taken on Wednesday, November 7, 2012. Sue Pischke/HTR

Coming soon in the Fall of 2022. Watch for further announcements.

We had a great turnout at the Manitowoc Public Library for the 2018 Tavern Talk, which you may view via the library's Facebook page.

The link to my Tavern Talk from 2017 is also still available at the Manitowoc Public Library's Facebook Page.